ANOTHER SUNNY DAY ON LOCATION 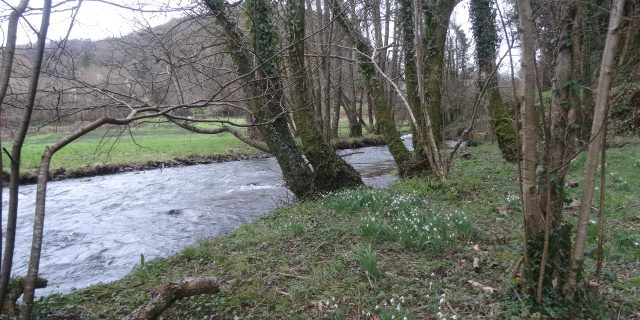 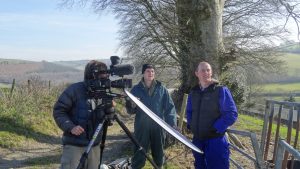 A NEW CAMERA ASSISTANT
Simon Vacher and I are out on another North Devon farm with a beautiful view (Stoneyard farm near Barnstaple) filming in the sunshine. In fact it is so sunny, that we have asked Chris, Phil Morrish’s younger brother, to hold the reflector to bounce some light on Phil’s face – because the contrast is so great. We could move, but I want the view of the rolling hills and farmstead nestling in the valley in the background! Phil, clearly, would rather be down in the yard with his herd of store cattle, than facing a camera and interviewer asking questions about why he’s taking part in North Devon Biosphere’s Estuary Project. But his willingness to help and his passion for the project gradually overtakes his wariness of the camera and soon he is walking and talking us through the technical stuff – every inch the professional presenter, as long as I don’t ask for too many takes! 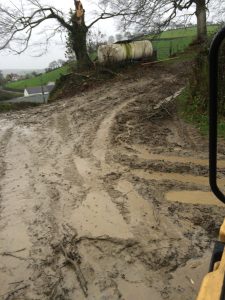 BEFORE: the chocolate soup pouring down the farm lane AFTER: the same track with the concrete cambered to send the water down to the sediment trap

DEVON RAIN AND MUD
But I’m jumping ahead. I’d met Phil and his lovely family, Dad Ron, mother Maureen, brother Chris and various siblings and children several times before we started filming. They were up against the same deadline we’d been given to get their project works done before the end of March. The main issue on the farm was that whenever it rained, the water gathered up mud and muck from the fields and carried this ‘thick chocolate soup’ down a steep, heavily used track to a T junction. Half of this dirty water poured into the cattle yards where it put an extra heavy loading on the pumps.

The other half travelled through the bale yards, spilling over into a neighbour’s steep, heavily used, horse paddock and running down in to a tributary of the river Yeo and on out to sea.. Phil is using the project grant to concrete the bottom of the track and camber it to direct all the water and mud into a sediment trap and on into some baffle ditches.
I was keen to film the ‘before’: the torrent of mud as well as the ‘after’, but for Phil the big headache was finding a run of dry days for the major task of concreting the track. The weather in February and early March was unkind. He’d scrape the track and lay stone only for heavy rain to deposit another layer of mud or wash away the hardcore. So we agreed to wait. Although Simon and I made a quick visit in February to get a few of the ‘before’ shots which are in the film.

DISCOVERING THE RIVER YEO
While we waited for Phil to get the concrete in, I explored the river Yeo, following it from Andrew’s farm, near Arlington, at the top of the catchment, past Phil’s farm, through Barnstaple, where it joins the Taw and finally out to sea. Our original plan was to film from a drone to illustrate how everything that pours off the land in the hills – eventually ends up via the rivers, in the estuary and out to sea. The Yeo joins the river Taw, near the Tarka trail by Barnstaple Civic Centre, where the biosphere team is based so I found myself asking my client’s boss for permission to fly a drone overhead which they duly gave. I discovered several beautiful spots on the river and because we had to deliver an early cut at the end of March (before the planned drone filming) I decided to use the flowing river as a ‘motif’ to link the farms and different locations through the film.

The snowdrop shots were filmed between Andrew and Phil’s farm near Shirwell. But for me the real find was the point where the river Yeo enters Barnstaple. Between the private farmland and a huge area of new housing which spills out from the town, a small water meadow runs alongside the cricket ground. One of those rare precious bits of land where town meets countryside and kids can still tiddle for sticklebacks or trout, dogs can splash in the water and families can picnic.

LISTENING TO AND LEARNING FROM THE FARMERS
Finally near the end of March, with about a week to spare before our deadline we got the chance to film Phil at work. As we film, I’m listening to what Phil is saying and how it will cut in with Andrew’s story which we filmed earlier. Aside from the basic information we need to get through – I want Phil to explain, like he did when I first met him, why the project is so important to the farm. It was if you like my eureka moment. When I began the research the brief from the biosphere team was that ‘agricultural runoff is a significant source of pollution in the estuary, affecting the shellfish industry and our bathing beaches. Creation of new wetland habitats can significantly reduce the pollution reaching the estuary.’ I did wonder whether farmers working in the hills would feel comfortable talking about shellfish and the estuary. But Tom Hynes, biodiversity officer for North Devon Biosphere has built up a great working relationship with farmers in the catchment over several years and he and Kate Weld have a good rapport with those working on the estuary project. We agreed early on that (like we did for boat stories with the fishermen) that the farmers should tell this story in their own words.

‘The last thing we want to lose is precious soil and nutrients from the farm’ Phil told me. As I listened to the farmers I began to see things from their perspective and realise that the sediment and nutrients I saw as poisoning the environment were valuable to the farm. It’s that simple – almost like one person’s terrorist is another person’s freedom fighter. OK maybe I’m being a bit over dramatic. But before whenever I saw mud and muck pouring down our lane, I thought of it smothering the wildlife in the river. Now I think of the farmer – losing the top soil or the nutrients he could be putting back into the grass – by digging a simple sediment trap and a few ponds or ditches. So I don’t mind if we are a bit repetitive in the film – I want to make sure the message gets through – and isn’t ‘lost in translation’ amongst all the technical explanations. So apologies to Phil for going over the same ground more than once. Chris chips in, trying to rescue his brother: ‘I’m sure that’s what he said last time’ but there is method in my madness. And so we film the sediment trap, with Phil explaining how he can empty it and return the soil to the top of the farm. And then while Phil and Chris begin digging the baffle ditches Simon and I walk down to the river. The fields slope down to river meadows and this could easily be a danger point for run off entering the river. But a lovely strip of woodland has been left as shade for the cattle making a natural buffer, and a pond traps sediment, so this side of the farm doesn’t need any remedial work. We film slow motion shots of the river where Phil and Chris played as children, before climbing back up to film them hard at work.

AND THE FARMER LEARNS SOMETHING TOO
Phil talks us through the baffle ditches – relatively simple structures which stepped gradually will ‘slow the flow of water down to a trickle, helping to prevent flash flooding and protect Barnstaple which is just downstream from the farm.’ He’s also keen to tell us what he learned from the project: that slowing the flow of water down can make all the difference. Slow the flow down and the sediments and nutrients have a chance to settle out. Simple and effective. Phil does the whole spiel in one perfect take. He’s a natural and a brilliant advocate to encourage other farmers to take up the grants! Chris glances my way – daring me to ask Phil to do it again! 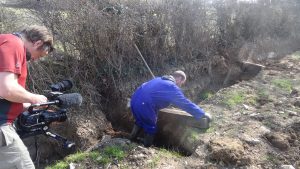 the river Yeo at the bottom of the farm

Job done – back to the kitchen for a welcome cup of tea. Huge thanks to Phil and Chris Morrish for being so patient and easy to work with during the filming. To Ron and Maureen and all the family for being so welcoming and helpful and Maureen for providing tea and scones!

from the farm gate to the estuary With the light fading we have one more shot to get. From the very top of the farm, the view stretches over the estuary with the new bridge visible in the far distance. It is the perfect end credit shot making the visual link between the farm gate – travelling all the way to the estuary. Now Simon and I have to complete the first cut ready to show our clients the North Devon Biosphere. To be continued.. constructed wetlands reduce the risk of flash floods into Barnstaple Simon Vacher talking to the cattle

Devon mum talks about losing her son at sea in short film for BBC
January 12, 2018

Our first day on location for our new film!
March 2, 2016
Recent Posts
Go to Top